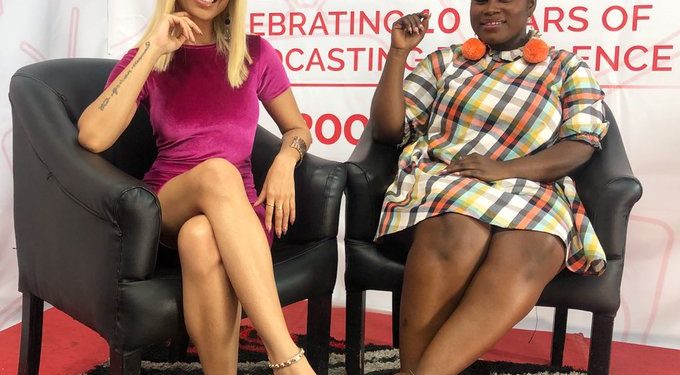 Deborah Vanessa Owusu Bonsu popularly known as Sister Derby took over as the host of the award-winning Celebrity Show, The Late Nite Celebrity Show on 9th October 2019 to mark the start of a yearlong 10th anniversary celebration of e.TV Ghana.

The special edition of the Late Nite Celebrity Show saw Sister Derby and Lydia Forson discuss how the youth can avail themselves to grow in a career they love and also how the issue of sex for grades in tertiary institutions should be addressed by the country as a whole.

e.TV Ghana promises its viewers the very best of the Late Nite Celebrity Show hosted by past presenters of the show such as Giovani Caleb,Dzifa Smith, Eddie Blay,among others.

Programmes Manager for e.TV Ghana, Mrs. Nosisa Doe expresses how happy she was with this initiative by the e.TV Ghana team.

“We are very excited to have past presenters of the show on board. We are celebrating ten years of broadcast excellence but we could not have celebrated this without their effort some years ago. We at e.TV Ghana look forward to working with these talented presenters who were once with us”, she said.

Project Lead for e.TV Ghana At 10, Ebenezer Acquah added that “it was necessary for e.TV Ghana to celebrate its 10th anniversary. For the past years, e.TV Ghana has been serving the nation with excellent broadcasting and we are moving forth with even greater achievements”. He also appreciated all past presenters who contribute to the 10th-anniversary celebration of the station.

The next special edition of the late Nite Celebrity Show will be aired on e.TV Ghana on the 11th of October, 2019 at 9pm.