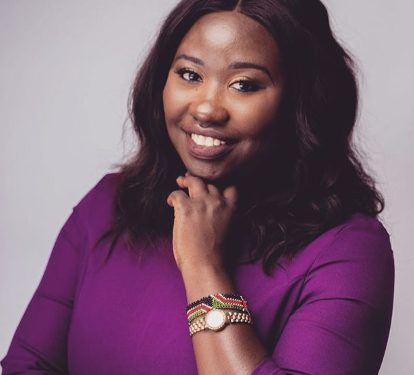 It is not unusual for one to hear men and sometimes women call other women arrogant because they are assertive. This behavior has shattered the self-confidence of many women especially those in Africa.

In redressing this notion, the Chief Director of Global Media Alliance, Miss Emma Wenani has passionately charged her fellow women to empower themselves, use their voices for themselves and the next generation of women regardless of what others say or think about that.

Read more: IWD: Equity is just an empty word in our part of the world

Speaking at a special edition of the e. tV Ghana’s African Women Voices to celebrate International Women’s Day, she commented, “Sometimes when women speak up, we are called arrogant, we’re called too known. And sometimes when you feel that you want to speak up you have to shout and exert your voice but it shouldn’t be so. I think you just need to say your mind. “

Ms Wenani described a scenario where she was considered arrogant by a policeman for being assertive.

According to her, a policeman stopped her one time on her way from work and wanted to know what car her husband used for work as she was always driving ‘his car’. After replying that she wasn’t married and asking why the policeman will ask that he said,
“This car is too big for you.” She immediately replied, “I really hope that one day your daughter will be able to buy a car that is too big for herself. If this how you’re thinking, then I am sorry this is not how we speak to people.”

She furthered that the policeman took offense with her response an enquired whether she was a Ghanaian. “Whether I am Ghanaian or not, the way you spoke to me is not right and you shouldn’t do it”,she replied

She encouraged those present saying, “We need to empower ourselves to be able to use our voices. If you’re not wrong, you’re not wrong. It doesn’t mean that when you say your opinion you’re arrogant or trying to show your privilege or something.”

The ever articulate Ms. Wenani appealed to her fellow women to build platforms that will propel the next generation of women not to be afraid of their and use their assertiveness for it is a powerful tool and “you’re not using it to disrespect anybody,” she stated.