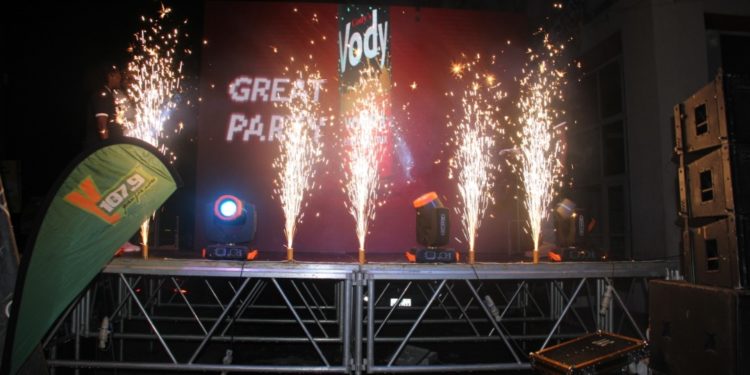 Rocktober is a music-packed activation meant to thrill audience on-ground and on-air with a master playlist from YFM’s coolest disc jockeys, hosted by Nockus with his silky baritone voice to die for.

With speakers blazing a whopping eleven thousand (11,000) decibels of sound power, patrons who gathered at the ‘Purple Pub’ for the ‘Friday Nite Mix Train’ defied the rain to dance their hearts out.

Nockus and Kojo Manuel who were the emcees of the night kept patrons engaged from start till the end of the show.

Masters of the turntable DJ Loft, DJ Pak, DJ kiss, among others took turns on the turntable to mix some Afrobeats, Hip Hop, Old School Music and Reggae songs.

Programmes Manager of YFM, Eddy Blay, made known the purpose and future of the Rocktober initiative.

“YFM has always been committed to serving its loyal listeners with the very best of music. This month of October is very special and we also want listeners to feel special. That is why we have brought radio to them so they can interact with their favourite DJs and emcees. I was taken aback when I saw people trooping in amidst the rains. The fun part is that this is just the first edition of the Friday Nite Mix Train. So I urge all listeners to expect YFM at the next nightspot near them”, he said.

The invigorating night at Purple’s Pub could not have been complete without the presence of the new energy drink in town, the Cody’s Vody Vodka Energy Drink. The Vody Vodka Energy Mix which was sampled at the Friday Nite Mix Train is a German Product made with delicious Vodka from Germany.

Marketing Manager of West Africa and Gulf Company (WAGCOL), who are the importers and distributors of this product, Weesta Adinku, expressed how pleased she was for her company to have supported the bashing event that took place at Purple Pub.

“I can feel the energy from all sides; the music, the people and Vody Vodka Energy Mix. We from WAGCOL are very excited to be part of YFM’s Friday Nite Mix Train. It is a great initiative YFM has embarked on. After all, people need some sort of stress release after a long week”, she said.

“I congratulate YFM on the Rocktober initiative. The station has its loyal fans at heart. I can tell from people’s demeanour at Purple Pub that YFM has achieved its goal of entertaining patrons with great variety of music by bringing the radio experience closer to its audience”, he said.

He also expressed his appreciation to West Africa and Gulf Company (WAGCOL), importers and distributors of the Cody’s Vody Vodka Energy Mix for their support.

It was a night of fun and music at Purple Pub Friday night at the YFM Rocktober OB as patrons at the Purple Pub could not hide their joy.

From the audience a gentleman named Chloe shared his experience, “I am very excited to be here. I live at Awoshie which is far from Osu, but when I heard that YFM was coming to Purple pub, I could not miss it for anything”.

Jerry Wonder also had this to say: “Initially, I got discouraged by the rain. But the good music from YFM’s DJs made me forget that it was even raining. That should tell you how good they are”.

YFM is the number one Urban Radio Station broadcasting across the golden triangle of Accra, Takoradi and Kumasi.

I am richer than most radio presenters – Shatta Wale

Shatta Wale is a Product - Bulldog