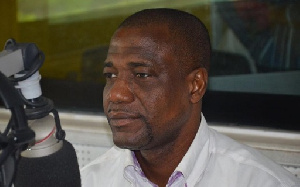 The independent candidate of the 2012 and 2016 Presidential election, Jacob Osei Yeboah popularly known as JOY has expressed his anguish over hardship in the country.

He made this expression during an interview on Happy FM’s political talk show, “Epa Hoa Daben”.

When quizzed on his opinion about the upcoming referendum for the participation of political parties in local governance, he said: “Nana Addo is deceiving Ghanaians by encouraging us to vote yes in this referendum and the media knows that. President Atta Mills was a far contrast to Nana Addo as he set up a constitutional review committee before there could be any changes or referendum to the 1992 constitution of Ghana”.

He also argued that President Nana Addo set up the referendum to “introduce vigilantism, winner takes all and the embezzlement of public funds at the district level”.

Mr. Jacob Osei Yeboah got tearful when he lamented that the president has incurred more hardship to Ghanaians through excessive borrowing.

“My name is JOY, which means I should be happy. But now I am sad because Nana Addo is disturbing Ghanaians. I have seen that ruling a country is not based on your age but your character”, he said.

On December 17th this year, there will be a referendum on the participation of political parties in the elections of metropolitan, municipal and district chief executives (MMDCEs).