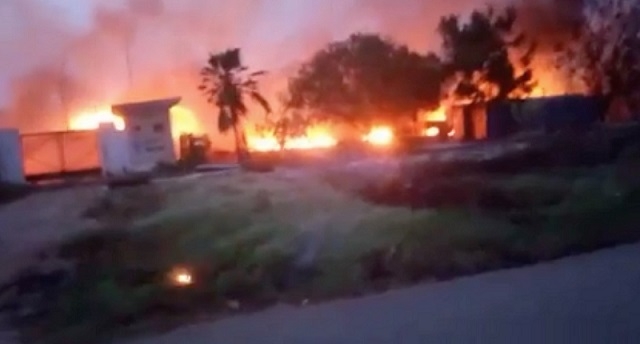 Six people have been burnt beyond recognition in a gas explosion at the Louis Gas Station behind the International Trade Fair Centre in Labadi in Accra. At least 12 others are said to be in critical condition after sustaining severe burns from the fire that came with the explosion.
The explosion with its attendant fire outbreak was said to have started about 6 p.m at the gas station near the Zenith University College. Properties running into several thousands of cedis have been lost to the fire.
According to Adom FM News Editor, Samuel Duwuona, residents heard a loud bang and ran out to safety only to notice that the gas station was on fire. The inferno billowed so high it caught up with the high tension cable. Residents fear the fire could extend to another gas station nearby as personnel from the Fire Service try desperately to put out the fire.
The officers of the Ghana National Fire Service brought three fire tenders to put the fire out but that appeared to be inadequate as the fire raged further. The personnel went for a refill but have retruned to the accident scene.
Officers of the police service are also reported to be at the scene trying to control the crowd some of whom are threatening to go closer to catch a sight of the fire.
There explosion has led to blackout in parts of the catchment area.