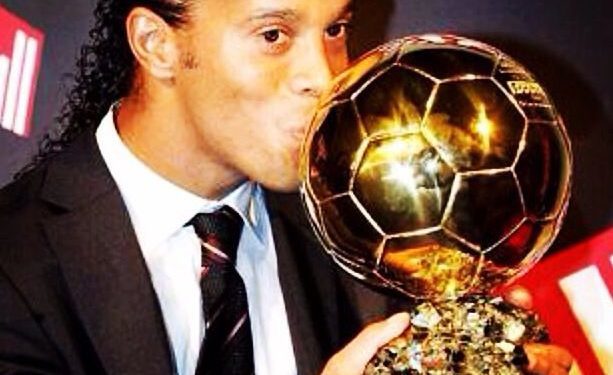 On this day 28 November 2005 (Exactly 14 years ago today) Former Barcelona and Brazil playmaker Ronaldinho won the Ballon d’Or award for European Footballer of the Year, despite competition from Frank Lampard and Steven Gerrard.

The then 25-year-old Brazilian international beat off competition from Chelsea FC midfielder Frank Lampard and Liverpool FC captain Steven Gerrard, in second and third places respectively, to become the third Brazilian to land the coveted prize, which went to AC Milan’s Andriy Shevchenko in 2004.

The Ballon d’Or is organised by France Football magazine and its winner decided by a poll of European soccer journalists.

Arsenal striker Thierry Henry was fourth in the voting, followed by AC Milan and Ukraine forward Andriy Shevchenko, who won the previous year.

“To be here with all those great players applauding me is a dream come true,” said Ronaldinho after receiving the golden ball trophy at a ceremony in Paris attended by several former winners.

“This gives me motivation to keep working and try to emulate them.

“I  have the chance to do for a living what I like the most in life, and that’s playing football. I can make people happy and enjoy myself at the same time.”

Ronaldinho was instrumental in helping Barcelona to clinch their first Primera Liga title since 1999 the previous season, scoring nine goals and providing many more.

On this day 28 November 2015(Exactly 4 years ago today) Former non-League player Jamie Vardy scored in his 11th game in a row to set a new Premier League record, netting in the first half against Manchester United.

Ruud van Nistelrooy’s record of 10 – set while at United – stood for 12 years but Vardy, facing the meanest defence in the division, surpassed the mark set by the Dutchman at the King Power Stadium.

That incredible goalscoring sequence started on the south coast with an 86th-minute penalty against Bournemouth on 29 August, when creating history was the last thing on anyone’s mind.

Three months later and everyone from international cricketers to Olympic gold medallists were taking to social media to offer their congratulations to the former factory worker.

Van Nistelrooy, who had sent Vardy a good luck message on Instagram before the game, also showed a touch of class in the wake of the goal that eclipsed his own achievement when he tweeted: “Well done, Vardy. You’re number one now and you deserved it. 11 in a row.”

On this day 28 November 2010 (Exactly 9 years ago today)  In a classic matchup, Roger Federer won his 5th season-ending ATP World Tour Finals tennis title with a 6–3, 3–6, 6–1 victory over Rafael Nadal of Spain in the final in London, England

Local rice to be listed on Ghana Commodity Exchange

Local rice to be listed on Ghana Commodity Exchange

Asamoah Gyan opens up on becoming MP for Weija-Gbawe