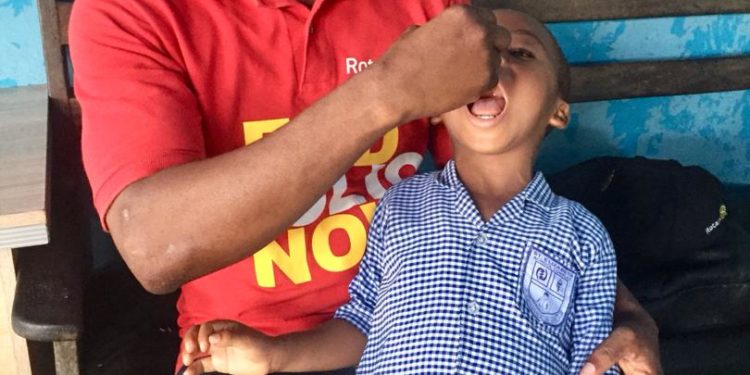 The Rotary Club of Accra-Tesano has embarked on a polio eradication fight aimed at preventing the deadly disease from affecting Ghanaians especially children.

The Rotary Club of Accra-Tesano, organized a polio vaccination exercise to mark the 2019 World Polio Day. The vaccination activity which took place at Chorkor, a suburb in Accra, saw over 1000 children being immunized. Polio is one of the world killer diseases that Rotary is near the mark of total eradication globally.

Rotary and its partners launched the Global Polio Eradication Initiative more than three decades ago and have made great progress against the disease since then. Polio cases have dropped by 99.9 percent, from 350,000 cases in 1988 in 125 countries to 33 cases of wild poliovirus in 2018 in just two countries: Afghanistan and Pakistan.

Speaking at the event, the President of the Rotary Club of Accra-Tesano, Rotarian Nat Amedzro, reiterated on the commitment of Rotary to providing relief and special interventions to impact communities positively.

“As a service club that has health as one of its key focus areas and with polio nearly eradicated, Rotary and its partners have committed to sustain the progress and continue to reach every child with the polio vaccine. The health of the community determines how strong the community is hence the need for this free screening,” Mr. Amedzro said.

As part of the Polio eradication campaign, the club in partnership with one of its strategic partners Action for Disability & Development in Offinso (ADDO) facilitated the surgery of a young girl who had been suffering from a polio effect on her limbs and is currently receiving treatment from the Orthopedic Training Centre in Nsawam. This was led by the Club’s Service Project Director Past President Jiggles Boakye Gyimah and Gordon Redgrift, Founder of Action for Disability Development in Offinso (ADDO).

According to the Club, these projects are in line with Rotary International’s six key areas of focus which are disease prevention and treatment; water, sanitation, and hygiene; peacebuilding and conflict prevention; maternal and child health; basic education and literacy; and community economic development.

Rotary Club of Accra-Tesano recently held a Hepatitis B and C free screening exercise at the forecourt of the Kaneshie Police Station to help detect the disease in people. The exercise which covered many communities around Kaneshie witnessed over 350 people being screened.

The Club also used the opportunity to undertake tree planting and landscaping exercise in front of the new offices of the Kaneshie Police Station.

In partnership with the Rotarian Action Group for Hepatitis Eradication (RAGHE), the Club has therefore rolled out a series of activities to engage the communities in order to achieve hepatitis zero target. The Club President Amedzro promised there were several other projects earmarked for implementation within the current Rotary year. He encouraged the working public, business professionals and entrepreneurs to join Rotary to help increase their reach in society.