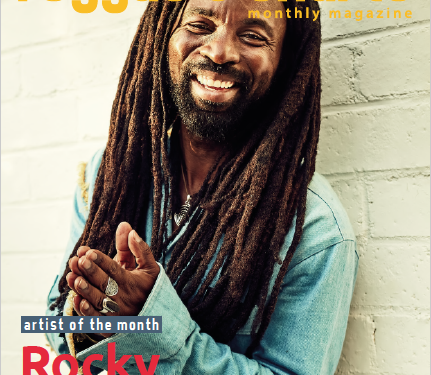 Global Reggae Charts is a monthly magazine that features key and major reggae releases across the world for “Best Singles” and “Best Album/EP”, thus, also highlights Reggae artistes whose works have been visible and influential every month.

Ghana’s Grammy nominee debutant, Rocky Dawuni, got the spotlight for “Artiste Of The Month” for May 2019 on their platform as “Artist Of The Month”, thus throwing spotlight on his latest body of “Beats Of Zion”, a 13-tracked album released in March 2019.
Two classic international standard videos have been released from the album already, with more visuals to be released too. “Beats Of Zion”, the album title track was shot in his home country, Ghana, in the heart of Accra in Jamestown, one of the clustered squatters in the Capital it was directed by Lex McCarthy.
The second video “Wickedest Sound” which featured Ghanaian BET Winner, Stonebwoy, details an Afro nightlife party with colourful scenes recounting the daily life of citizens who work tirelessly during the day and later chill out in the night regardless of their challenges in life; it was shot and directed by Slingshot HD Ghana.
Watch “Wickedest Sound” on youtube here:
“Beats Of Zion” Album also features iconic Ghanaian Musicians Sarkodie and Wiyaala. The album also featured rising female Dancehall artiste, Alika.
Previous Post

Video: TV Stations have Literally pushed us out of business – Selassie Ibrahim

Video: TV Stations have Literally pushed us out of business - Selassie Ibrahim