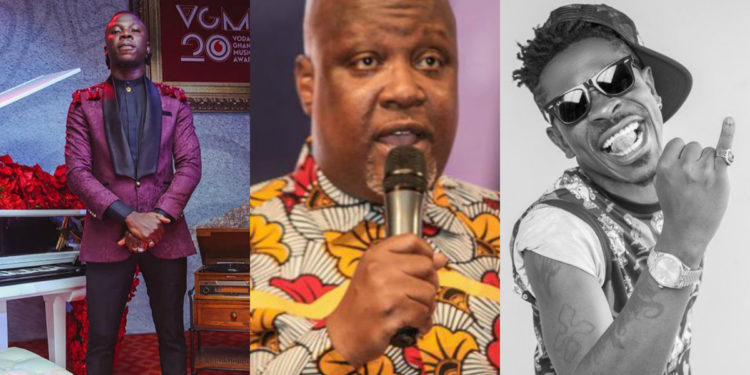 He made this call based on what happened at the 2019 Vodafone Ghana Music Award (VGMA) when he -Stonebwoy- pulled a gun when a misunderstanding broke out between supporters Stonebwoy and Shatta Wale at the event.

According to Kwame Sefa Kayi, Stonebwoy lacks “emotional stability” to be called a gun owner.

Speaking in an interview on an Accra based radio station and monitored Happyghana.com, the Master of Ceremony (MC) for last Saturday’s VGMA, Sefa Kay, said “They said Stonebwoy’s gun is a license weapon. If so, the police should revoke his license because this is not the first time he has pulled his gun in a crowd. The police should revoke his license or his permit to carry a gun. He doesn’t have the emotional stability or balance to be a gun owner.”

There was an altercation between some members of the Shatta Movement (SM), the fan group aligned to Shatta Wale, and Stonebwoy’s fans, who are known as the BHIM Natives at the Dome, Accra International Conference Centre during the 20th edition of the VGMA.

The rowdy scenes happened after Stonebwoy had been called on stage to receive the award for Reggae/Dancehall Artiste of the Year.

Although it is not clear what triggered the fracas, patrons at the event and some people who watched the show live on television alleged that they saw Shatta Wale walk towards the stage with some of his fans, while Stonebwoy was also seen pulling a gun before walking off stage.

The carrying of a gun by Stonebwoy led many people asking if it was legal to display a gun in such a situation and if the weapon was licensed.

Sefa Kayi added that, “The two should be allowed to sign a bond of good behaviour for about three years. If they go against the bond, they should go to prison for 2 years. If we don’t send a strong message, the people might think laws don’t work in Ghana.”

However, The Accra Regional Police Command yesterday afternoon arrested Shatta Wale and Stonebwoy for the disturbances that rocked the 2019 VGMA in the early hours of Sunday.