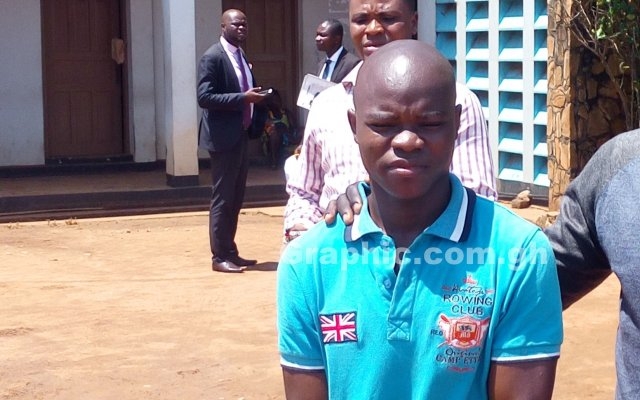 A 22-year-old man yesterday confessed to the Accra Central District Magistrate Court to killing a seven-year-old girl at Ashaiman, near Tema, after which he had sex with the corpse.
Lucas Agboyie, alias “Sympathy”, told the court that he strangled his victim after she had refused his advances and even begged him not to have sex with her.
“I then took her to my room and slept with the body repeatedly,’’ Lucas said, to the shock of the audience in the packed courtroom.
Confession
Agboyie, who wore a blue T-shirt over a pair of blue jeans and was clean shaven and energetic looking, threw his arms wildly about as he described events that led to the little girl’s death.
According to him, on the day of the incident, he had smoked marijuana, right after which he saw the girl passing by his house.
“It was a Sunday morning and after taking ‘ganja’, I saw the girl passing. I called her and sent her to go and bring me my towel that had been hung behind my house. On her return, I told her that I wanted to sleep with her but she refused.
“I held her hand and she began struggling with me. She begged and told me to let her go and started screaming. So I strangled her.
“I then took her to my room and slept with the body. Afterwards, I took the GH¢20 she had in her possession and used it to buy ‘ganja’,” he said.
Shock, disbelief and tears
The victim’s mother, who was in court, could not hold back her tears as Agboyie made the confession.
She had to be consoled by her family members who had accompanied her to the court.
As the confession was unfolding, others could be seen shaking their heads and shedding tears.
Charge and delay from A-G
Agboyie has been charged with murder and is currently going through committal proceedings at the magistrate court, a prelude to the actual trial at the High Court.
Meanwhile, the court, presided over by Mr Worlanyo Kotoku, has chastised the Attorney-General’s (A-G’s) Department for the undue delay in giving advice on the docket of the case.
According to him, the incident took place on April 19, 2015; Agboyie was arraigned on April 23, 2015, while the docket had been sent to the A-G’s Department for advice in June 2015.
“I don’t know why the case is still delaying. The accused person’s story has been consistent since the first day he was brought to court. These are committal proceedings and not the actual trial,” he said.
The prosecutor in the case was absent and so the magistrate tasked the investigator to follow up at the A-G’s Department to help expedite the release of the docket for the continuation of the committal proceedings.
A lawyer in the courtroom who was touched by the victim’s mother’s wailings volunteered to follow up to the A-G’s Department.
The case has been adjourned to October 4, 2016.
Facts
The facts of the case, as presented by the prosecution, were that on April 19, 2015, the seven-year-old girl was sent by her mother with a GH¢20 note to buy bread.
After waiting for a long time without their daughter returning home, her parents became alarmed and sought the help of neighbours to search for her.
“Later, an informant alerted the search party that he had seen Agboyie pulling the girl into his metal container. When the search party went to the metal container, Agboyie was nowhere to be found.
“To their utmost surprise, they found the naked body of the girl lying supine on an old students’ mattress, with blood oozing from her mouth and nostrils,’’ the prosecutor said.
He added that Agboyie was later apprehended and “he confessed to killing the girl, after which he had sex with her’’.
Alleged accomplice
According to the prosecution, the search party believed that the girl had been killed for ritual purposes and demanded that Agboyie mention the name of the one who had hired him to commit the crime.
“He insisted that he had killed the girl on his own volition. Dissatisfied, the residents started beating him and threatened to hand him over to an angry mob to lynch him,’’ the prosecutor said.
He said Agboyie thereafter mentioned a man named Baba Ali as the one who had sent him to commit the act, after which he was handed over to the police.
“When the police confronted him on the identity of his accomplice, Agboyie retracted his earlier statement and said he had acted alone.
‘’He said he had mentioned the name because of the beatings he received from the crowd and fear for his life,’’ the prosecutor said.

We fear for our lives – Suhum EC officials

We fear for our lives – Suhum EC officials