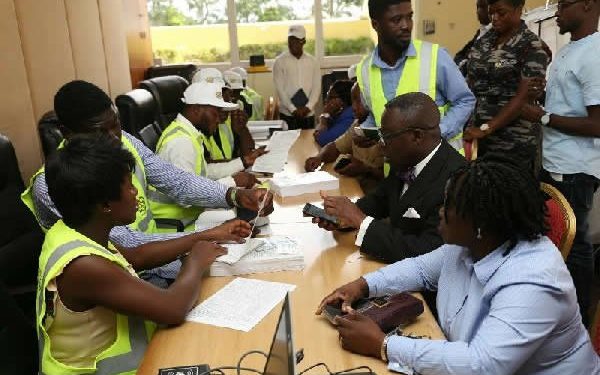 Co-host of the Happy Morning Show on Happy98.9FM, Raymond Nyamador, has descended heavily on the National Identification Authority (NIA) saying their actions and inactions are setting a stage for chaos and doom for Ghana.

According to him, the refusal of the NIA to put an end to their ongoing registration process in the Eastern region amidst the coronavirus outbreak in the country is a bad example and seeks to override the authority of President Nana Akufo-Addo.

Raymond who was obviously angered by the appalling precedent being set by the governmental institution had this to say: “What the NIA is doing in the Eastern region will get others to do the same thing and get people to gather. This is a bad precedent which can lead to chaos. Our leaders should not take us for people who don’t think through things and cannot make inferences from statements made by the President. It was a clear directive. When you go to registration centers of the NIA, it is a gathering. It is a gathering because a lot of people queue up over there and form clusters. You cannot describe the setting we see there as not being a gathering”.

He went on to caution that if the NIA goes on with its activities, it might create room for people to gather in public and create the 2meter social distancing, provide hand sanitizers and say they’re good to go. But like the pastor in North Suntreso, they might be arrested for contravening the ban on social gatherings imposed in the wake of the Coronavirus (COVID-19) outbreak in the country. And he believes it will not auger well for the country if such things happen.

Raising his fears about the process, he reechoed that if the process is not halted, the happenings in China and Italy will likely be incomparable to what will befall Ghana.

The Ghana Medical Association (GMA) has called on the NIA to suspend with immediate effect the ongoing mass registration exercise in the Eastern region.

In a press statement signed and issued on Wednesday, March 18, 2020 by the President of the GMA, Dr. Frank Ankobea, and the General Secretary, Dr Justice Yankson, the GMA said it was in the interest of public health and safety to suspend the exercise as it defeats the spirit and letter of the directives (especially on mass gathering) issued by His Excellency the President of the Republic of Ghana as part of the measures to combat the COVID-19 outbreak in the country.

It is in the considered view of the GMA that this mass registration activity by the NIA, if allowed to continue could create a fertile ground for potential spread of COVID-19, endangering the lives of the staff of the NIA, the communities involved and the entire nation in the process. This will undoubtedly be fatal for the country.

Foreigners in Ethiopia being attacked over virus

Foreigners in Ethiopia being attacked over virus