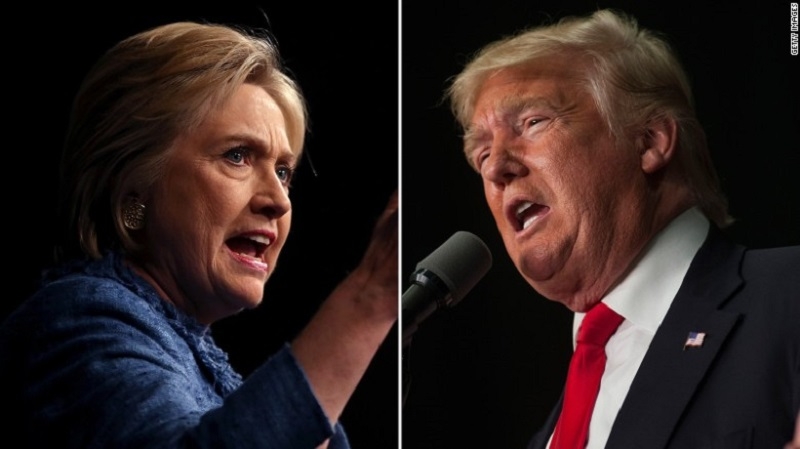 The Clinton campaign is stepping up its attacks on Donald Trump’s past leading the “birther” movement to question President Obama’s citizenship as it continues to paint the real estate mogul as a bigoted conspiracy theorist.
Over the weekend, the campaign tweeted from Clinton’s account that it was “astonishing” that the Republican nominee still “refuses to acknowledge” that the president was born in the United States, after Trump would not answer a reporter’s question whether he now believed Obama was a citizen. On Tuesday, spokeswoman Christina Reynolds brought up Trump’s birtherism in a statement responding to his comment that Clinton did not “look presidential.”
“This isn’t the first time Donald Trump has had a problem looking at someone different from himself and actually seeing them,” Reynolds said. “He looked at a sitting president and said he wasn’t American.”
Wednesday, Clinton’s campaign again tweeted about the controversy.
When Trump began reaching out to black voters in speeches last month, arguing that voting for Democrats had not alleviated poverty and crime in black communities, the Clinton campaign hit back with a coordinated campaign to portray Trump as a bigoted conspiracy theorist, synthesized in Clinton’s speech two weeks ago in Reno tying the candidate to an “alt right” network of white supremacists and extremists.
“Let’s not forget that Trump first gained political prominence leading the charge for the so-called ‘birthers,’” she said then. “He promoted the racist lie that President Obama is not really an American citizen — part of a sustained effort to delegitimize America’s first black president.”
The day after Clinton’s speech, her running mate, Sen. Tim Kaine, reminded voters at a speech at the historically black college Florida A&M University of Trump’s birtherism. “Donald Trump was a main guy behind the scurrilous and I would say bigoted notion that President Obama wasn’t even born in this country, and Donald Trump has continued to push that irresponsible falsehood,” Kaine said.
But Clinton hasn’t brought up Trump’s birther past since she began campaigning again on Monday after a stretch of fundraisers. A surrogate for her campaign and member of the Congressional Black Caucus, Rep. Gregory Meeks, D-N.Y., says he hopes the candidate herself will not focus on the issue going forward as she enters the homestretch — instead leaving it to aides and surrogates.
“I think what folks want to know is what are you going to do for us as president and how is that going to make a difference in our lives,” Meeks said. “And leave the other stuff to guys like me.”
Clinton’s alt-right speech made sense as a “one-time piece” that laid out the facts for the voters before moving on, Meeks said, comparing it to when Obama gave a speech on race during his campaign in ’08.
“It’s more important for her … to lift the hopes and aspirations that Americans have,” and to highlight the investments she will make in jobs, Meeks said. The congressman and other members of the Congressional Black Caucus have been highlighting the birther issue for her, with Meeks calling Trump’s refusal to disavow his birtherism “a way to appeal to the David Dukes of the world.”
Clinton is still showcasing Trump’s comments about minorities, but as part of a broader argument saying Trump does not respect all Americans. At a voter registration event in Tampa on Tuesday, Clinton said Trump “demeans” groups of Americans, including minorities, adding that they “have every right to be respected by the president of the United States.” Kaine also spent a good portion of his speech in Cleveland Monday emphasizing that Trump’s company was sued for housing discrimination against black renters in the 1970s.
Polls suggest black voters overwhelmingly back Clinton over Trump, but some Democrats are worried about a report that shows black millennials are not enthusiastically supporting her. Clinton will need high turnout among black voters to help drive her victory.
Trump, for his part, is trying to distance himself from his past questioning of whether the first African American president was born in the United States, telling reporters at multiple points during the campaign that he doesn’t “talk about it.” One of his top surrogates, Ben Carson, said on CNN Tuesday that it would be a “good idea” for Trump to apologize for his birther past to try to win back some black voters alienated by the movement.
On Tuesday, Fox News’ Bill O’Reilly asked Trump if he thought his birtherism had hurt him with black voters. Trump replied, “I don’t know,” before reiterating that he no longer talks about Obama’s citizenship.
Trump never said he was satisfied when Obama released his long-form birth certificate from Hawaii in 2011, but largely stopped bringing the matter up afterward. Asked by Anderson Cooper in 2015 if he now believed the president was born in the states, he said he didn’t know but no longer focused on it.
Obama has long treated Trump’s birther attacks as a joke, memorably roasting Trump in his address at the White House Correspondents Dinner in 2011 as Trump stiffly listened. He said Trump now could get back to the “issues that matter, like, did we fake the moon landing?” He mocked Trump’s connection to the show “Celebrity Apprentice,” saying that his decision about whether to fire Lil Jon or Meat Loaf from the show “would keep me up at night.”
Obama never shied away from the birther issue, which struck many of his supporters as an example of the irrational and sometimes racially–motivated opposition from conservatives who were questioning his legitimacy instead of his policies. In 2012, one of the hottest items in Obama’s online campaign merchandise store was a white coffee mug with Obama’s newly public birth certificate pasted on it. “We sold close to 40,000 made-in-the-USA mugs with the birth certificate graphic,” a campaign aide told Yahoo News at the time. “We bought all of the white union-made mugs in the country.”